The 'Not So Big House' 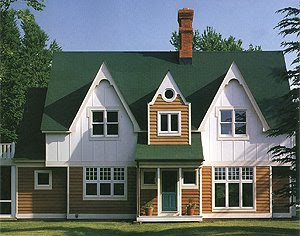 I’ve long been a fan of architect and author Sarah Susanka and her concept of creating the “not so big house.” In response to the giant McMansions that have invaded the American landscape over the years, Susanka has championed smaller homes with greater functionality and charm – she urges people to “build better, not bigger.” She has written several books on the topic. I own Creating the Not So Big House, which offers great ideas on how to make the best use of space in your home.

Susanka has had such an impact on modern architecture that "BUILDER Magazine" is going to honor her for being one of the 30 most notable innovators to have influenced the housing industry within the past 30 years.

Now, I’m not criticizing people who have big homes, but rather the homes that are thousands of square feet, with little character and only two people living in the dwelling - that’s what I can’t tolerate. Those homes consume so much energy, space and do little to enrich the areas in which they are built. I admire older homes or homes that are built in the more traditional style, especially if you build a home in a more established neighborhood (kudos to those folks keeping with tradition). Susanka’s style leans towards Craftsman, while I’m drawn to Colonial and Federal style homes. That’s why I’m also fan of the magazine “New Old House.” But, I think you can incorporate Susanka’s theories into any style home.
Cheers to Sarah Susanka!
Image courtesy of www.notsobighouse.com
Posted by JMW

Darling, it is I who am honored. Your post sent my mind spinning. Thank you for your words of insight and divine ramblings.

thank you! I have been trying to remember the name of this designer

A Place to Dwell